Hours after a mysterious “earthquake” — 2. 6 on the Richter scale — registered on the devices of the European Mediterranean Seismological Center, the circumstances behind the series of explosions that shook Syria overnight Sunday-Monday are starting to become clear.

An increasing number of media organizations associated with the Syrian regime and Hezbollah are hinting that Israel was responsible. According to a report in the Al Akhbar newspaper, identified with Hezbollah, bunker buster missiles, which do not explode on impact but rather deep in the ground, hit bases in the Hama and Aleppo areas. Hence the “earthquake.”

First and foremost was the sheer power of the attack. The pictures and the sounds, and the large number of casualties, point to an incident of larger scale than those to which we have become accustomed. We are not talking here about just another strike on another Hezbollah convoy, but rather what would appear to be a new step in what is now the almost-open warfare being waged between Iran and Israel in recent weeks on Syrian territory. The same player that earlier this month attacked the T-4 airbase, from which an Iranian attack drone was launched into Israel in February, apparently struck again overnight Sunday-Monday, taking the gloves off and moving into a new level of military confrontation.

Third, the latest strike was carried out at a time when the US Secretary of State Mike Pompeo is visiting the region, and just a few hours after he held talks with Prime Minister Benjamin Netanyahu. The two of them used the opportunity to issue no shortage of threats and promises to thwart Iran’s aggression and nuclear ambitions. 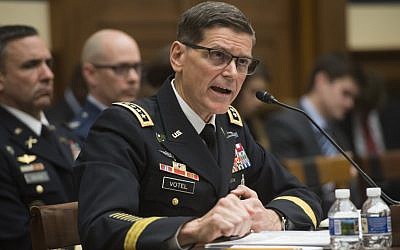 Late Sunday, news also broke of a phone call between Netanyahu and US President Donald Trump. Israel’s Defense Minister Avigdor Liberman has been meeting with his US counterpart James Mattis in Washington. And less than a week ago, Gen. Joseph Votel, the head of the US army’s Central Command, or CENTCOM, whose sphere of responsibility includes Syria and Iran, made a largely unpublicized visit to Israel.