In the “knowledge panel” that provides easy access to information next to search results, Google was showing “Nazism” as an “ideology” of the party as of Thursday morning. The word “Nazism” was hyperlinked to a secondary page that shows “Nazism” alongside other “ideologies” of California Republicans like “Conservatism,” “Market liberalism,” “Fiscal conservatism,” and “Green conservatism.”
— Read on news.vice.com/en_us/article/vbq38d/google-is-listing-nazism-as-the-first-ideology-of-the-california-republican-party

Cambridge Historian Hugh St. John Spencer has uncovered a new collection of letters and diary entries from British Prime Minister Neville Chamberlain. Chamberlain, who is best known for signing the infamous Munich agreement with Nazi Fuhrer Adolf Hitler, served as Prime Minister of the United Kingdom from 28 May 1937 to 10 May 1940. Chamberlain is often accused of selling Czechoslovakia down the river and paving the way for Hitler’s invasion of Poland in September 1939.

But these new documents uncovered in the British archives, reveal that Chamberlain, who resigned the day the Germans struck West on 10 May 1040, and who died the following November, until the end believed that his diplomacy had been perfectly appropriate. “I can see now that I was simply a man ahead of his time,” Chamberlain concluded. “I had not understood that Herr Hitler did not realize that he was a leader in the Twentieth Century, and a man who was incapable of recognizing the wisdom of my policies.” The former PM went on to conclude that: “What can I say, other than that the British people let me down when they eagerly embraced the soi-disant leadership of that buffoon Winston Churchill!”

I know this is a parody site, but the Happy Hour did, actually, take place.

But think about it for a second: Whites offering free alcohol to indigenous people? Wasn’t that a tool the White oppressors used to destroy Native culture?

Is this the best way for “woke” Whitey to show he cares about minorities? Let’s see, I can give them free booze or I could give them gift cards to Barnes & Nobles? Hmmmm. I can incentivize them to drink, or to read? Let’s go with the booze!

You never know what’s true and what isn’t when you’re talking about North Korea. But this is a bit different.

We shall see how this all plays out. I remember that, at the time, I doubted Gorbachev’s sincerity. I even stared calling it “Gorbaloney,” which I think was a term coined by Pat Buchanan. But Gorby was sincere, and he did start the dismantling of the Soviet Union, although that was not his intention.

A video of North Korean leader Kim Jong Un crying about his country’s terrible economy while surveying its coast is said to be making the rounds among the country’s leadership — and it could be a sign he’s ready to cave in to President Donald Trump in negotiations.

Japan’s Asahi Shinbun quoted a defector with contacts inside the country as describing a video in which a narrator explains Kim is crying that he can’t improve North Korea’s economy.

The defector reportedly said the video surfaced in April and high-ranking members of North Korea’s ruling party viewed it, possibly in an official message from Kim to the party.

I’ve been saying for years that if the Republicans were the party supporting abortion, that support would be deemed “racist!” Why? It’s what the Left likes to call “disparate impact.” If you have a policy that seems to be non-racist, but in its impact it affects, let’s say, Black Americans, who end up being 50% of the the victims of the policy, while they’re only 13% of the population, that’s disparate impact. So it is with abortion. Blacks are 13% of the population, but they account for 35% of all abortions. That’s disparate impact, usually associated with racism. 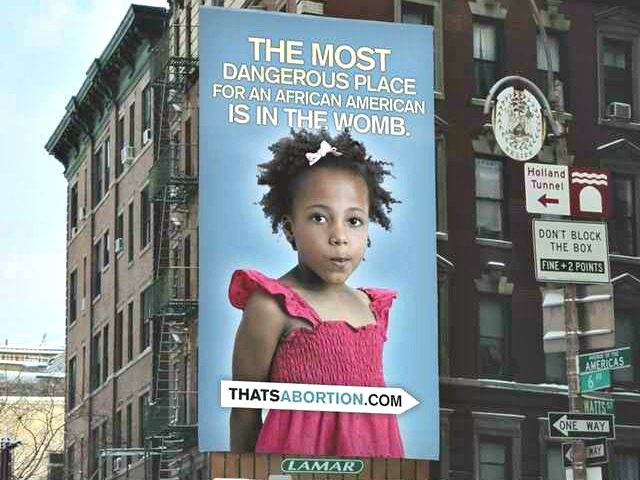 And that’s where Alveda King is going here.

A letter sent to Starbucks CEO Kevin Johnson, and signed by King and other pro-life leaders, said, “If you think this public relations fix means Starbucks is no longer complicit in racism, it’s time to wake up and smell your own coffee.”

“But Starbucks had racism in its corporate identity long before the April arrests,” King wrote in her Washington Examiner op-ed. “Through its corporate donations, Starbucks contributes to one of the most racist organizations in our nation’s history. Planned Parenthood, the largest single provider of abortions in the U.S., performs more than 300,000 terminations each year.”

In her column, King observed to Starbucks the racist roots of Planned Parenthood, beginning with its founder, eugenicist Margaret Sanger.

“More African-Americans have died from abortion than from AIDS, accidents, violent crimes, cancer, and heart disease — combined,” she explained. “In America today, a black child is three times more likely to be killed in the womb than a white child. And since 1973, abortion has reduced the black population by more than 25 percent.”

King pointed out that 80 percent of Planned Parenthood facilities are located in inner city neighborhoods, and that the abortion chain’s business model “was specifically engineered to target them.”

“About 13 percent of American women are black, but they have more than 35 percent of the abortions,” she wrote.

Like I’m shocked! And, hey, how come no one is trying to connect the Green Party to Roseanne Barr? Wasn’t she once one of their presidential candidates?

Ongoing litigation, travel costs, and staff salaries are also likely to eat up whatever is left, meaning those who donated to Stein are unlikely to receive a once-promised chance to vote on how the post-recount money would be spent. Nor have donors been given much of a window into how Stein is actually spending their donations.

WASHINGTON, D.C.—Former president Barack Obama called the White House today to personally thank Donald Trump for taking the blame for a recently circulated set of photos of immigrant children detained at the border that actually depicted the consequences of immigration policies in place during Obama’s tenure.
— Read on babylonbee.com/news/obama-calls-trump-to-personally-thank-him-for-taking-blame-for-photos-of-immigrant-children/

“Sometimes my dad would listen to Rush Limbaugh and he would kind of argue with him,” recalls Rice-Cameron, 20, a sophomore at Stanford University. “I just found myself agreeing with basically everything Rush Limbaugh was saying.”

Rice-Cameron’s parents are Democrats. His mother, Susan Rice, served in the Obama administration, first as U.N. ambassador, then as National Security Advisor. But despite his parents’ political leanings, “they believe extensively in debate and engaging the other side and exposing people to different viewpoints,” he said.

Rice-Cameron started listening to talk radio on his own. That’s when he discovered Mark Levin, saying the firebrand pundit became his “ultimate political hero.”
— Read on www.thecollegefix.com/post/45367/

France is gearing up to release 40 radicalized prisoners in the coming months, a move which the country’s lead counter-terrorism prosecutor says is a “major risk,” as they could have become more radicalized behind bars.
— Read on www.rt.com/news/428162-france-radicalized-inmates-released/